Pirates, emperors, martyrs, geniuses or a little history of the Saxons 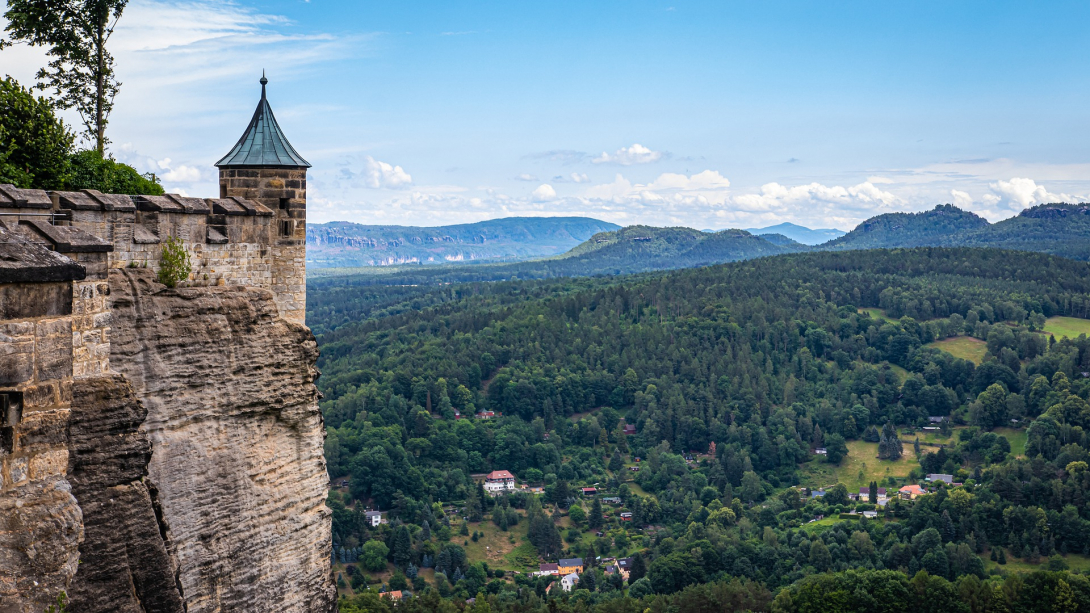 The picture shows a view from the Königstein fortress in the Saxon Switzerland near Dresden, photo (public domain) by Denny Franzkowiak on Pixabay.

There are various myths about the origin of the Saxons. Some believe that they were part of the army of Alexander the Great (4th century B.C.E.) others claim that they were descendants of the legendary Troy (ca. 1,000 B.C.E.). From the Sax, a common short sword at this time, they received their name, it is said. The Spartans also used such short swords and I therefore tend to think of Spartan ancestors. But anyway, at least from a mythical point of view one is not wrong to place the ancestors of the Saxons in early, maybe even prehistoric Greece, who perhaps arrived in Europe as bold sailors.

The first modern mention of the Saxons was made by the Greek Ptolemy in the 2nd century as a West Germanic tribe settling in Holstein. The Saxons who lived on the North Sea coast at that time were bold pirates who often even prevailed against the technically stronger Roman warships. When the Romans gave up their colony of Britain in the 5th century, a part of the Saxons with parts of the tribes of the Angles and Jutes moved to Britain, where they met the Celts who had already immigrated in the 3rd century. That these Anglo-Saxons about 1.500 years later not only made up a large part of the population of the "New World" but with the "British Empire" a world empire and the biggest colonial power in the known history, these direct descendants of the Saxons certainly means not only good karma.

Around the 5th century, in the course of the migration of the peoples at that time (Migratrion Period), on the other hand, many tribes moved from the north to the south of Europe or to the west, often across half of the continent, due to a cooling of the climate. With parts of the Saxons also the tribe of the Franks moved. The latter founded the Frankish Kingdom, for a long time the mainstay of the Roman Church in Central Europe. In its largest extension, the Frankish Empire stretched from the Atlantic to Magdeburg (now a city in the middle of Germany) and from the North Sea to the Mediterranean. With this expansion, the Saxons to the east of the Franconian Empire also came into difficulties at the beginning of the 7th century, and the relationship between them deteriorated considerably when the Franconian Empire wanted to completely annex the Saxons and their lands.

The strong sense of independence of the Saxons became particularly clear during this period. They were not only very attached to their freedom, but also to their natural religion. An open fight followed for at least two centuries. Even the malicious felling of the Irminsul, a sacred tree of the Saxons dedicated to the god Donar or the insidious slaughtering of 4,500 free Saxons by Charlemagne did not help the Franks (Massacre of Verden). Since that day Charlemagne is also called Charlemagne the Butcher of Saxons. In this context, the Saxon freedom fighter Widukind (not the better known monk Widukind of Corvey, 9th century) with his heroic courage and endurance, who for a long time was the oppressive superiority of the Franks, must also be mentioned. It was not until the beginning of the 9th century that the Saxons became part of the Frankish Empire as the Duchy of Saxony, geographically today corresponding to large areas of Lower Saxony and North Rhine-Westphalia, but this did not mean that the Saxons broke with their traditions.

With the division of the Frankish Empire by the descendants of Charlemagne, the Saxons belonged to the split-off eastern part from which the first German Empire arose later (from the western part, France for short), on whose foundation the subsequent Saxon kings and emperors had a decisive influence. Because the Saxon Heinrich I, who was elected king of the East Franconian throne - who rejected the (Roman Catholic) anointing and thus coronation as emperor, because he wanted to be independent of the church and in 929 also founded the fortress Meissen - united Swabia, Bavaria and Lorraine under his crown and among his descendants, the so-called Saxon dynasty of the Ottonians (from the name Otto I. to Otto III., House of the Liudolfingers) formed in the 10th century the first German, old or Holy Roman Empire (of the German Nation), which had existed until the beginning of the 19th century.

In the 11th century the dukedom of Billunger followed under the Salian emperors. While the first Saxon emperors had still subordinated the church to their secular power, this changed at the latest from the 12th century onwards and the church gained more and more influence, whereby constant power struggles occur. Lothar the Saxon, German king and later Emperor Lothar III., played a greater role in this period. Under the Saxon Duke Henry the Lion, at the end of the 12th century, the duchy of Saxony was divided into the duchy of Westphalia, as well as Saxony, later Saxony-Lauenburg and Saxony-Wittenberg. The line of the Ascanians, who were enfeoffed with the duchy of Saxony, ended in the 15th century, whereupon the Meissen Wettin dynasty received the electorate and the name Saxony migrated geographically even further south up the river Elbe.

After the Guelphs, the Wettins are the oldest German noble family whose earliest proven ancestral seat was the castle of Eilenburg (Sachs.). In 1089 the Wettin Heinrich I. was enfeoffed with the Mark Meissen (founded by Otto I. in 965) and with it the uninterrupted succession of rulers of this dynasty in the Mark Meissen or the later Electorate and Kingdom of Saxony began, almost a millennium long (over 800 years). The Wettins in their various (Albertine and Ernestine) lineages also had greater influence in the later states of Thuringia, Saxony-Anhalt and Bavaria (Coburg) but also in Belgium, Portugal, Bulgaria and last but not least in Great Britain. Queen Victoria (19th century) had Saxon roots on her mother's side and married Albert of Saxe-Coburg and Gotha. Later after the 2nd World War they denied their roots and renamed the house "Windsor", i.e. even the current British monarchy has significantly Saxon roots.

The Albertine line of the Wettins, which originated in the 15th century, ruled as dukes, electors and - after Saxony became a kingdom in 1806 under the influence of Napoleon - as kings in Saxony. Elector Friedrich August III became the first king of Saxony. Since then he called himself King Frederick August I of Saxony (the Righteous). It was not until the 19th century that the territory of Saxony, as it is known today, was formed. During this time it developed into the first real industrial nation on German soil. In the November Revolution of 1918, the last Albertine, King Friedrich August III, was overthrown and with it ended the Kingdom of Saxony, which became the Free State of Saxony in 1919 after the first democratic elections.

Famous Saxons are for example the writer Erich Kästner (20th century, "There is nothing good unless you do it"), the world-famous medieval mystic Jackob Böhme, Adam Riese (15th century, "father of modern computing") or Gottfried Wilhelm Leibniz (universal genius of the 17th century), who received his doctorate at the age of 20 and invented the dual system (0,1) and founded the Berlin Academy of Sciences. The composer Johann Sebastian Bach (18th century, one of the most famous classical musicians of all) and the writer or composer Richard Wagner (19th century) were also Saxons, as were the poet Gotthold Ephraim Lessing (18th century) or the known philosophers Johann Gottlieb Fichte (18th century) or Friedrich Nietzsche (19th century) or the reformer Martin Luther (16th century). And the Saxons also shine in other fields and in modern times, because who is not familiar with Katharina Witt, for example, who took the hearts of people around the world by storm as a multiple figure skating Olympic champion in the 1980s?

And speaking of modernity: In this context, one should not forget that the peaceful revolution in 1989, which led to the reunification of Germany had its roots in the city of Leipzig (Saxony).

This very short outline of the history of Saxony or the Saxons shows one thing very clearly: The fame and significant influence of the Saxons through the millennia around half the world is evident. In my opinion, an excerpt from the so-called Saxon song (variant from 1842) gives a small but fine answer to the question of why:

A pious heart and diligent hand!
That's my watchword!
Shine brightly on your virtue,
you noble pearl in a German wreath. (...)
Glück auf, Glück auf (Greetings from miners similar to good luck), my Saxony!